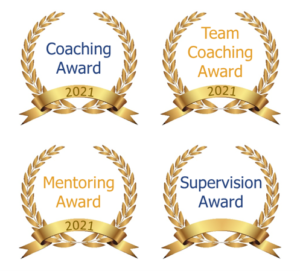 For 2021, EMCC Global will be presenting four awards.

plus a discretionary President’s Award

Nominations are now open.  To find out more and to make a nomination click here.

The Coaching Award went to University of Dundee/Copenhagen for their programme Smile Healthy to Your Diabetes.

The Mentoring Award went EGESYS R&D and Innovation Support Centre from Turkey for their mentoring programme.

The Coaching Award went to an individual – Eve Turner (UK).

In addition the President’s Special Award for a lifetime of contribution to coachind and mentoring went to Professor David Megginson (UK).

The Coaching Award went to an organisation – Coacharya (India).